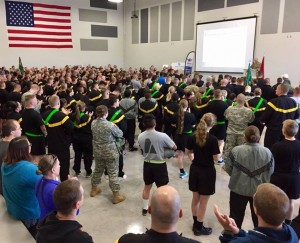 There are numerous upcoming volunteer opportunities with BestPrep and community-based organizations. If you are interested in participating, contact Jason Kley, jason@carlsoncap.com, 952-230-6705.

Last year, Minnesota National Guard had the unfortunate record of being second in the country behind Pennsylvania for suicides.  40 soldiers felt that they had no option but to take their own lives over the last 5 years.  50 took their own lives over the course of 8 years.  To help soldiers, Minnesota National Guard started an Resilience, Risk Reduction, and Suicide Prevention program training 320 Suicide Intervention Officers and resilience trainers, raising awareness with testimonial talks, videos, roundtables, and family inclusive events like Power of One Fun Run and Walk.

The annual Power of One Fun Run and Walk takes place during Suicide Prevention week to coincide with National Suicide Prevention Day.  FPA Pro Bono Committee has been a part of this program since its start in 2015.  FPA and other Yellow Ribbon organization are there to show support and as community based organizations available to provide financial, mental, and vocational resources.